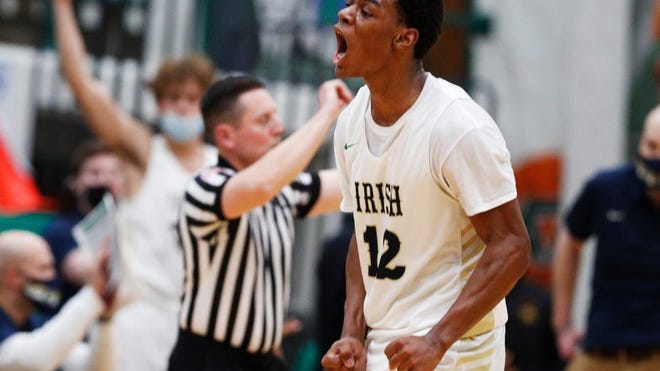 Illinois high school football season continued on Friday and here are some key highlights from the sixth week of games:

Hononegah has a devastating pass rush

Hono faced Belvidere North quarterback Mason Weckler for a loss seven times in his 14-9 win on Friday. This is nothing new: Hono has been putting pressure on opposing teams all year. Hono (6-0) had 42 tackles in his first five games, including seven each by linebacker Dylan Sayles and defensive tackle Aiden Peters and six by Brigham Molander.

Hononegah went from a 3-3 defense to a 4-3 for the spring season and he seems to have improved his passing speed even further.

“Since moving to this new defense, we’ve mainly been working on trying to reflect what the offensive line is doing,” Hononegah coach Brian Zimmerman said. “When it comes to going quickly, we work our technique off of that. The guys we have on the defensive front are really good at what we do. It’s pretty awesome.

Big game:How Hononegah came out on top in the end to win the battle of the unbeaten against Belvidere North

Lena-Winslow had to fight, but the Panthers claimed a 38-27 victory over unknown, non-conference foe Chicago DePaul on Friday, maintaining his perfect season record. Durand / Pecatonica rebounded from their tight backhand to first place St. Teresa and reloaded their dangerous passing offense, while dissecting Dakota 46-0 this week as well.

Best of the best:Best High School Football Week 6 performances in the Rockford area

Hunter Hoffman completed 16 for 19 for 179 yards and 4 touchdowns in Du / Pec’s landslide victory over Dakota.

This sets up the Week 7 showdown that a lot of people had on their radar since day 1. Du / Pec (5-1 overall, 5-0 NUIC) heads to Le-Win (6- 0, 6-0) for the upcoming Friday’s Battle of NUIC’s Best Dogs – and for a rematch for one of last season’s most spectacular comebacks. Le-Win scored a touchdown with 12.6 seconds left to knock out the Rivermen 24-21 in the spring final.

“We remember,” Le-Win head coach Ric Arand said after his Panthers’ victory on Friday. Addition, only: “We are ready.”

North has a new side

Zack Michaels got his first varsity bus ride Friday night and provided most of North’s offense early, running 17 times for 72 yards in the Blue Thunder’s 14-9 loss to Hononegah. He tore up his ACL two weeks before the first game of the spring 2021 season, but returned on Friday to constantly plow for tough yardage.

“He played really well,” said North coach Jeff Beck. “For his first game and only six months away from the surgery, he took a lot of litters. We weren’t sure if we needed to look at his litters, but he worked on his conditioning and lifts to get his strength back. We are really proud of him and the way he fought tonight.

The north shows its courage

The Blue Thunder lost 14-9 to No. 8 Hononegah but showed he could be a force in the playoffs, keeping Hono at 134 total yards of attack.

“Our kids have been showing a lot all season,” Beck said. “Coming here on a big stage – 5-0 to 5-0 on their return home – our kids didn’t shy away from the challenge at all. We were leading at half-time. And after they got those two quick scores (out of the first five games of the second half), we didn’t fold. We got back to it and gave ourselves a chance.

“These are our children. They are just tough. They are mentally tough. We are small. We are undersized. But we will never give up. These kids have shown what we’re about to do tonight.

Harlem is a racing team

After leading the state in passing with 305 yards per game last year, Harlem has been under 100 yards this year. On Friday, Harlem threw just nine passes – completing eight – for 52 yards in a 39-13 victory over Boylan. But the Huskies ran 45 times for 292 yards. It would have been unthinkable – especially against Boylan – for Harlem at almost any time in the past 20 years.

The Tigers used the first game of Friday night’s resounding victory over Rock Falls to work on their passing offense – and she pulled it off with flying colors.

The Tigers, known for their powerful attacks while taking the state’s second place in 2018 and 2019, and while soaring to a 5-0 start, earned their sixth victory of the season with a more balanced offense. Friday. Junior quarterback Braden Smith went 4 for 4 for 172 yards and 2 touchdowns, all in the first half and his two touchdowns in the first quarter.